Though long an important location for indigenous communities and trading companies alike, The Town fo Rocky Mountain House itself as an official entity has a relatively brief official history.

The townsite was formally granted Village status on May 15, 1913, when the following notice appeared in The Alberta Gazette:

Notice is hereby given in accordance with the provisions of The Village Act in that behalf by order of the Minister of Municipal Affairs the following area, namely: That portion of the northeast quarter of Section 22, Township 39, Range 7, west of the 5th Meridian which is registered in the Land Titles Office for the North Alberta Land Registration District as Plan Number 101-A-J, has been erected a village under the name of the Village of Rocky Mountain House of the Province of Alberta.
Jno. Perrie
Deputy Minister of Municipal Affairs 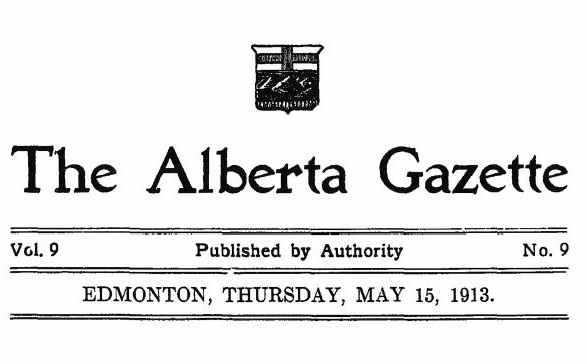 Excerpt from The Alberta Gazette, published May 15, 1913

On April 28, 1927, the Minister of Municipal Affairs ordered land withdrawn from the Municipal District of Lochearn No. 40, and added to the Village of Rocky Mountain House. Excerpt from the Alberta Gazette, published May 15, 1927

In 1927 The Canadian National Railway held title to its right-of-way through the village, while the Canadian Pacific Railway Company's right-of-way bordered the village limits. Four years later CPR made application for more land, and  the Board of Public Utility Commissioners granted the request.

On November 30, 1931, the Board of Public Utility Commissioners ordered “30 acres, more or less” to be separated from the Village lands, in accordance with the Public Utilities Act. 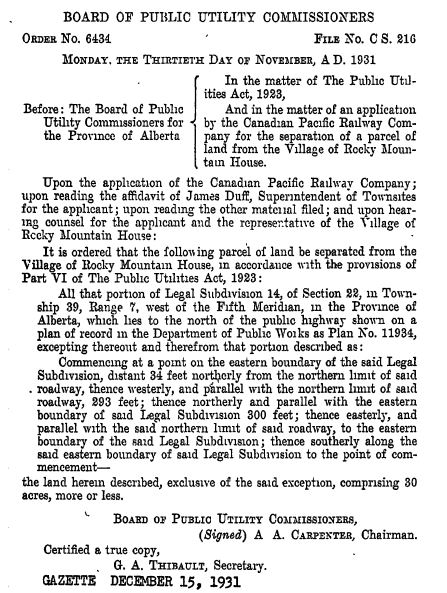 On January 1, 1935, two parcels of land were annexed in accordance with The Town and Village Act. Once again it was the Board of Public Utility Commissioners who granted the request, this time at the request of the Village Council of the day. With over 700 inhabitants, the Village met all prerequisites to become a Town.

On August 31, 1939, Rocky Mountain House was proclaimed as a Town! The Proclamation was signed by Lieutenant Governor J.C. Bowen on recommendation of Minister of Municipal Affairs. 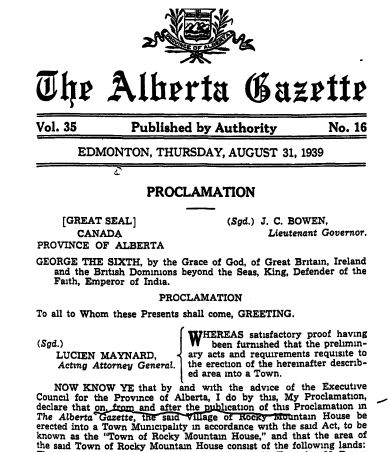 The Village Council would serve as Town Council until the following February, when an election of Mayor and six Councillors would take place.

W. H. Teskey held the Chair's role when the Village was promoted to Town. The first Mayor of Rocky Mountain House, W.J.T. Strong, was elected in 1940.

The Town was just eight years old when it reached its outermost limits. On June 1, 1947, the Board of Public Utility Commissioners authorized further annexation of land adjacent to the existing Town limits, writing, “appearing that from the proximity of streets and building and the probably exigencies of the Town that it is desirable to include within the Town the property hereinafter described…” The next expansion came in 1961, following a public hearing held in the Women’s Institute Hall on January 17 of that year. The Public Utilities Board approved significant land area to be annexed to the Town but noted, “while there is need for the annexation … it will be some time before such area is fully developed and in the meantime the taxpayers of the undeveloped potion thereof will not be receiving much more in the way of services from the Town than they have been receiving from the Improvement District.”

Farm properties remained taxed at Improvement District rates, while houses and residential yards were to be assessed and taxes as other Town properties only after they were connected to water and sewer services. Eleven parcels of land were separated from then-Improvement District No. 65 and the annexation was approved, retroactive to December, 1960. 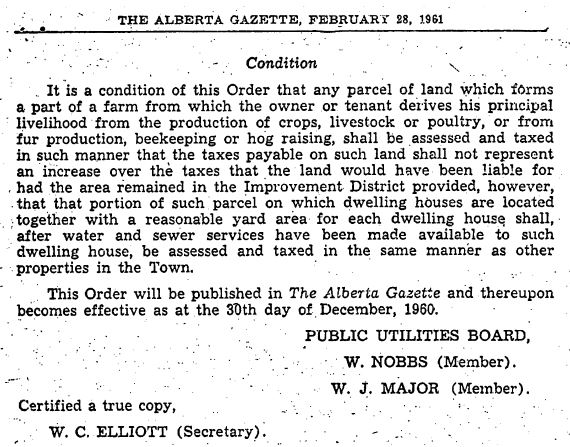 The Town's population more than quadrupled in 37 years. With 3,360 residents in 1975, Town Council, led by Mayor W.T. Teskey, approached the Local Authorities Board with a request to annex 122 acres immediately north of the existing townsite. The Board approved the request In accordance of the Municipal Government Act and the Local Authorities Board Act, retroactive to January 1, 1975.

Its decision was based on 1956, 1968 and 1973 planning documents, and the Red Deer Regional Planning Commission’s forward projections to 1988.

Of the 122 acres, 54 were already owned by the Town would provide for suitable immediate development, while entire 122 acres would satisfy Town growth for 10-15 years.

The board noted certain extensions of town in easterly direction at some time in the future, would permit development of an industrial area east and north of Hwy. 11.

Landowners of parcels making up the remaining 68 acres were generally in favour of the annexation, and were assured that active farm properties would qualify as farm land under the Municipal Taxation Act.

Improvement District 10 was strongly in favour of the annexation, and asked that further parcels to the east also be considered. (Those parcels were not approved for annexation at this time.) 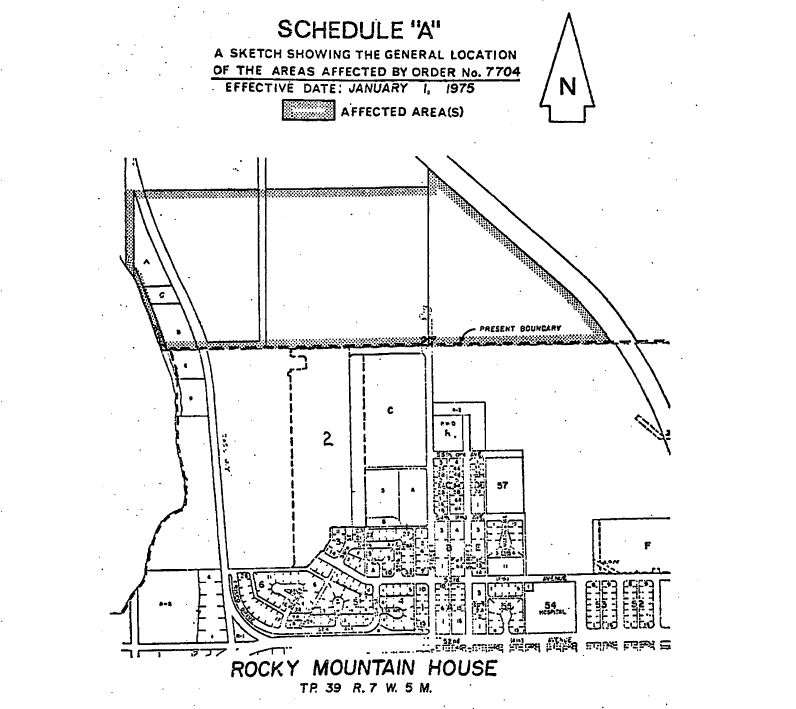 1981: the Town takes its modern shape

On January 31, 1981, the Local Authorities Board approved further annexation which drew new Town limits close to today's borders. Four territories of land to the North, East, South and South West totalled 1,631 acres, of which 469 were deemed undevelopable because of muskeg, pipelines, roadways and railways.

Some 131 landowners (including the Town) held titles to parcels within the four territories. The Board received 15 submissions, of which nine were opposed to the annexation. Some parents of school-aged children were concerned about losing bus service, but the school board promised no change to bus routes.

The north and south territories were approved as "logical extensions" to the town boundaries. and the balance approved to planning purposes. The board found that, “while required by the Town to meet its 20 year planning time frame, is in excess of it’s immediate needs.” However, including all 1,631 acres inventory now would allow for long-term planning, particularly for utility and road plans.

Once again, productive farm land would continue to be assessed and taxed as such.

The land was separated from Improvement District No. 10 with its full support, and annexed to the Town of Rocky Mountain House. In 1999, a further 340 acres were separated from the Municipal District of Clearwater No. 99, and annexed to the Town off Rocky Mountain House. 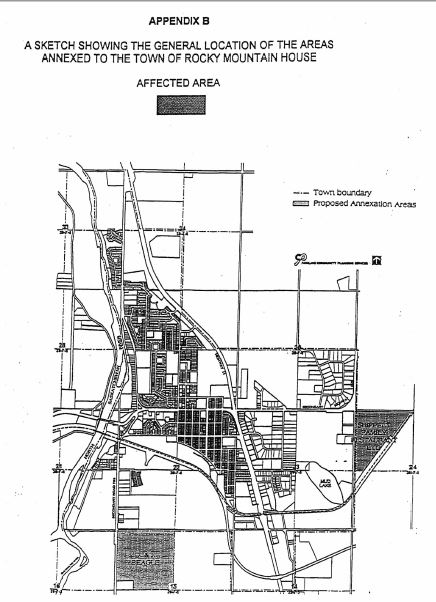 Since then? Well check out this time-lapse satellite imagery to see how Rocky Mountain House has evolved since 1984. While the Town limits have stayed more or less the same, development has filled in previously open lands within Town borders: